This was the last thing I saw 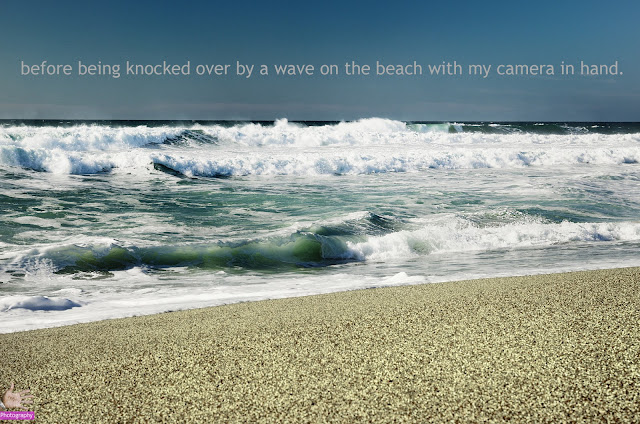 That morning there had been "Wave Warnings" in the weather reports along the coastline in Northern California with specific warnings not to turn your back on the ocean. Still we decided to go for a beach walk at Point Reyes since we had no intention of swimming in the Pacific at this time of the year!

The light was amazing and the beach was beautiful and we spent a relaxing few hours enjoying almost deserted, expansive beaches while enjoying the spectacle of waves crashing at a safe distance from us. 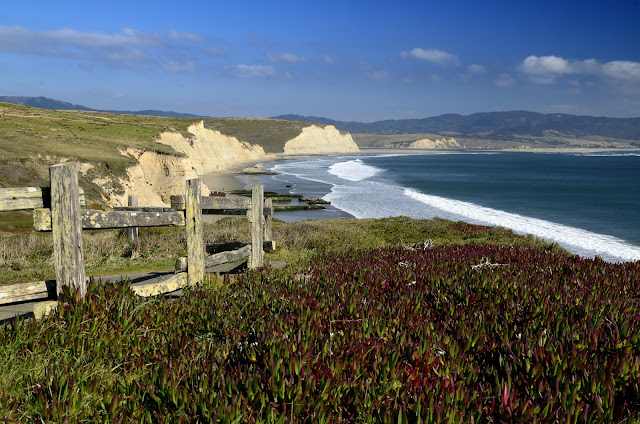 On the way home, we drove down to the South Beach where the waves where even larger and more spectacular. I found a position where the waves seemed to be performing on cue and looked around to make sure there was good distance between me and the water's edge. It was an elevated spot on a dune formed right on the beach, and when crouched low I could get dramatic views of the waves without going to the water's edge.

I crouched and had just taken the first shot so that I could check if I was at the ideal spot, when I was hit hard on one side of my body and pushed to the ground! A wave had come up on the beach in a sort of horseshoe movement and exploded on my back and left side. So even though I had been keeping an eye on what was happening in front and all seemed well, I was literally thrown a curve.

Down I went into the sand, fully dressed, and holding a Nikon D7000

. I had the presence of mind to not let go of it otherwise it would have been taken out into the ocean as the rogue wave roared away back into the infinite depths it had sprung from.

The D7000 is sold as having some amount of weather sealing but is not expected to be as robust as my full frame Nikon. Even so, "weather sealing" shouldn't really be taken the same as waterproof, and nowhere has Nikon said it's DSLRs are waterproof.

So did I Panic? Not really. I'd seen this video some time ago with Chase Jarvis.

…and thought as long as I stay calm and think clearly, all will probably be ok.

Here is what I did
As I climbed up the sandbank and up off the beach, I kept the camera held with the lens pointing downward. I didn't move or operate any of the buttons or switches. Antonella gave me her scarf which I compressed around the camera and lens to absorb most of the water. After a few minutes I then dabbed around all the switches and buttons with the scarf. And then once more wrapped the camera in the scarf for the drive home.

Once home I took a clean damp cloth and worked it all over the camera and still attached lens to try to get rid of the salt and sand. Then holding the camera with the lens pointing downward, remove the lens and put on a body cap. Now I gave the body a more vigorous clean with a damp cloth followed by a meticulous wipe down with a dry cloth.

After leaving the body and lens overnight in a well ventilated room. I used an air bulb to blow into all the nooks and crannies of the body and lens, being mindful of which way I had the camera turn for each area I worked on. There was quite a bit of water expelled from places like the main function with buttons, the eyepiece area and the tripod mount. Once I'd was satisfied I'd blown all the water away, I opened up the battery compartment and the doors on the sides of the camera — everything was dry.

So although I didn't get the shot I was after, I didn't have to wave goodbye to my Nikon D7000

.
Posted by Pure Roijoy at 2:46 PM No comments: Links to this post