Leroy is on his way again 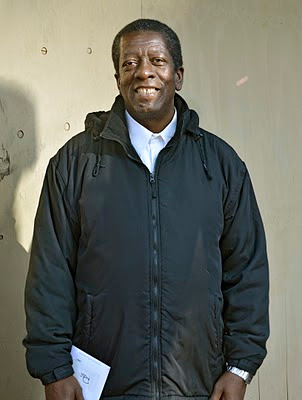 In a very recent post I introduced you to Leroy. Well over the weekend Leroy gave me a call and let me know that he had landed a job and was due to start today (Monday).
This was such great news to hear for so many reasons but also it was the manifestation of Leroy's optimism and proactive determination to regain control of his life in this time of worldwide economic difficulty. And also proof that, as I had surmized, he is a man of action and is able to turn his words into something tangible.
So this morning I was privileged to meet with Leroy and take this portrait in downtown San Francisco, as he made his commute for his first day back at work. It was taken at the same spot where I first met him and heard his story.
He's promised to stay in touch and let me know how things go but as I said before, I can only see success and fulfillment for this amazing man!
The rest of the day for me was driving to Emeryville to photograph an art installation at an artists residence. The weather was sunny and golden today and all in all a very uplifting day for me.
Posted by Pure Roijoy at 11:14 PM No comments: Links to this post 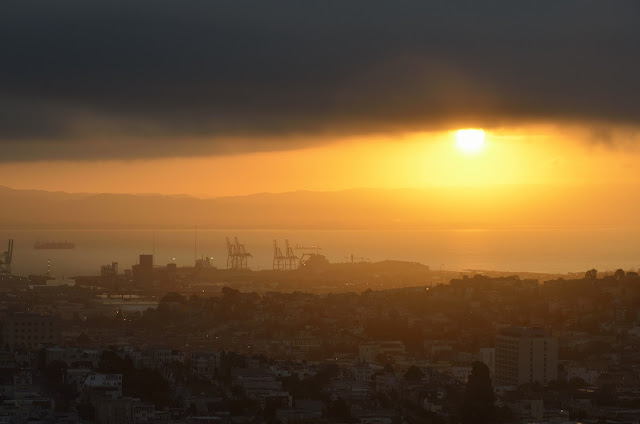 Did I really agree to meet Sai at 6:15 this morning or did I just dream it? It's 5:45 am now and I realize that it wasn't a dream! I jumped out of bed, got ready and grabbed my camera bag.
We drove up Market Street and set up our cameras on the pedestrian overpass just by Romain Street. Sunrise was due at 6:39 am and we were ready for it. 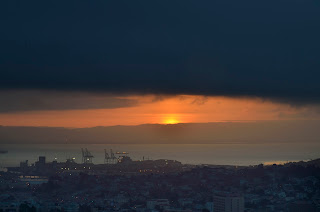 As the sun peeped over the distant hills the view changed from black and gray to a display of golden and red light made the more intense by the dark clouds hanging above the bay.
It was very cold but the show was worth it. I can't help noticing that 6:30 in the morning is a very busy time with joggers and dog walkers making up the major population. It's also really cool watching the lights go off in the city as daylight marches in unstoppable.
Posted by Pure Roijoy at 11:05 AM No comments: Links to this post

The sun came back to town 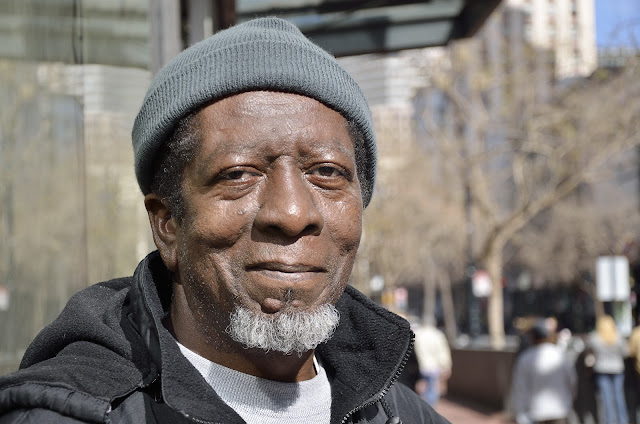 After many days of rain it was wonderful to be out in the sunshine again. I'd been to the gym and now I was walking along Market Street. There was a gap in the steady procession of pedestrians and I found myself caught in a smile with the guy selling the Street Sheet Newspaper who was standing on the sidewalk.
I walked over to him and asked how he was doing. Not surprisingly he told me that times were hard but he was hopeful that his fortunes would be changing around April time. I was interested to hear his story and he was happy to be exchanging conversation outside on this glorious day.
It turns out that Leroy was originally from Jamaica and had spent some time in the UK and the Caymans before coming to the USA. Things had been good until a few months ago when his employment took a hit under the constraints of the economy. But Leroy has a plan and a very realistic and workable one, and I'm fairly convinced that he's going to be just fine.
He's a thoroughly interesting and humble individual and I spent about a half hour talking with him. Even if the sun hadn't come back to town today, the time I spent chatting with Leroy would have still brightened my day. As I left him, he was kind enough to let me take this portrait of him.
Wishing you success Leroy!
Posted by Pure Roijoy at 1:30 AM No comments: Links to this post

Where oh where is the Batman? 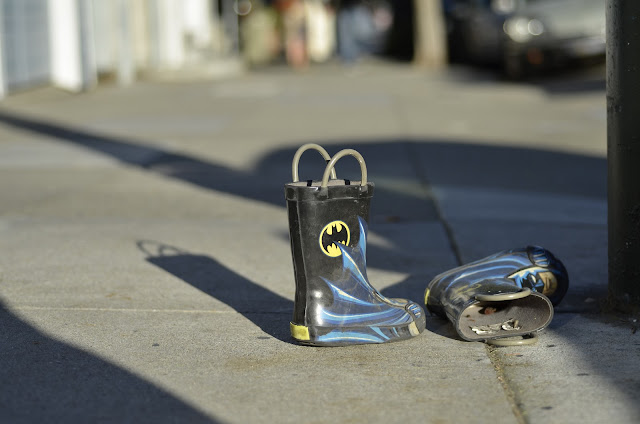 It was another gloriously sunny day so I wrenched myself away from my computer to go and get some air and some rays. I've been busy all day making sure I have everything in order to meet with my tax accountant in the morning.  As soon as UK tax is sorted for the year, then along comes US tax! Oh well. c'est la vie.
So here I was walking along Haight Street when I notice that Batman has either had a very rough night and has crawled off somewhere, or, whatever he came upon last night frightened him clean out of his boots...
It was a brief walk but I had my camera in hand and here are some of the captures along Haight Street.


Posted by Pure Roijoy at 6:48 PM No comments: Links to this post

January Shooting and an updated site!

The holidays are over and the world of work seems to have finally returned to it's deeply grooved pattern again for the masses. For me, it means that more opportunities are becoming apparent now that everyone has their new year resolve to make 2011 better than 2010 ever was. The gyms are full to heaving and everyone is focused on their new targets in all of the fabric of society.
To get into the spirit of things, I've also updated my website which is now live at roibrooks.com. 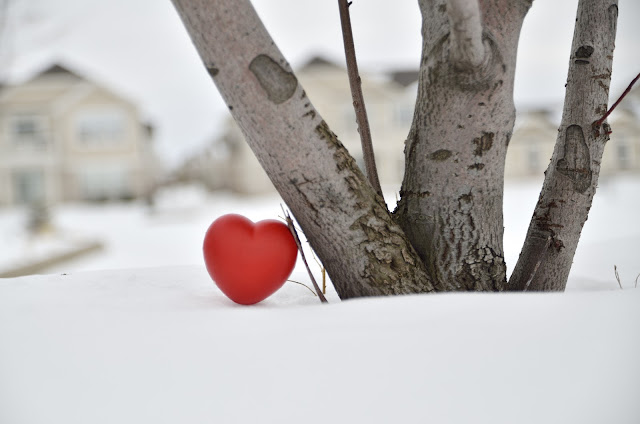 My stock images continue to sell across 6 libraries and I took the opportunity to visit Chicago and get some snow shots. I also composed a few Valentine themed shots that I was able to get accepted by the stock image libraries. I also submitted other Valentine themed images and my best seller so far is this one with the heart-shaped keyhole surround


Still on a sort of romantic note, I also did a shoot called Vampirish. And did a very quick cut video of behind the scenes from the actual shoot. 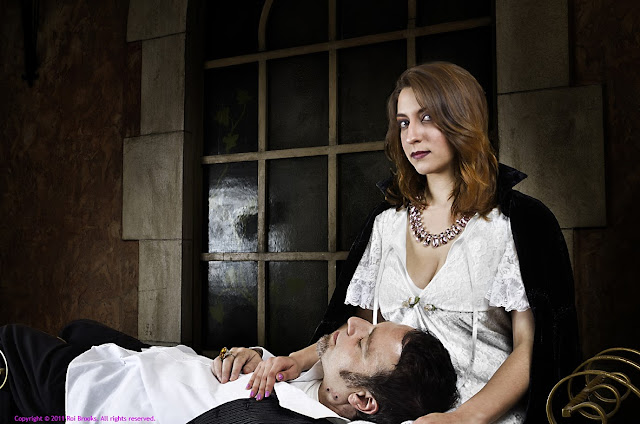 There are always head shots to be done too. 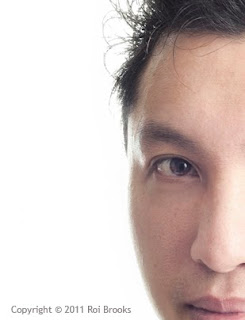 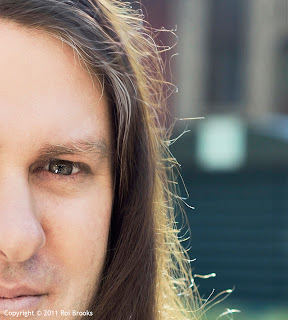 There is a great company in the Bay area named Revel Systems who are using iPads to run programs that enable them to work as point of sale systems for all different types of businesses. The customization and options of how you manage takings and inventory are gi-normous! Anyway I shot some products for them and then shot and produced 6 videos too.

Posted by Pure Roijoy at 12:26 AM No comments: Links to this post