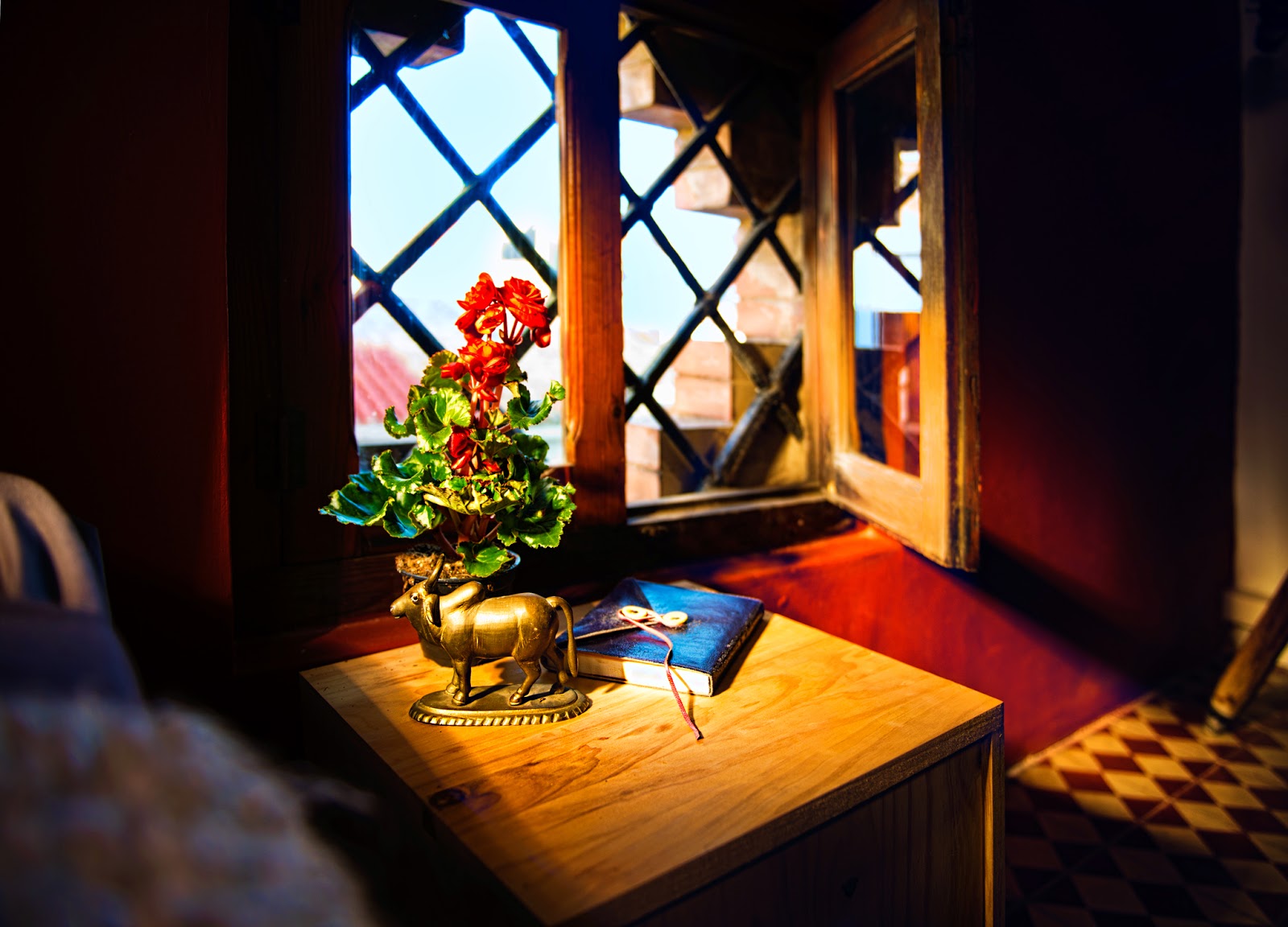 Valencia was the first of the locations for this AirBnB campaign that I worked on and it was really nice to find myself in Europe again. In addition to the location shoots that were planned, the film director also wanted to include highlights of the Falles festivities in her piece. After spending the morning checking out the available locations, the spaces were confirmed and everyone was ready to roll. 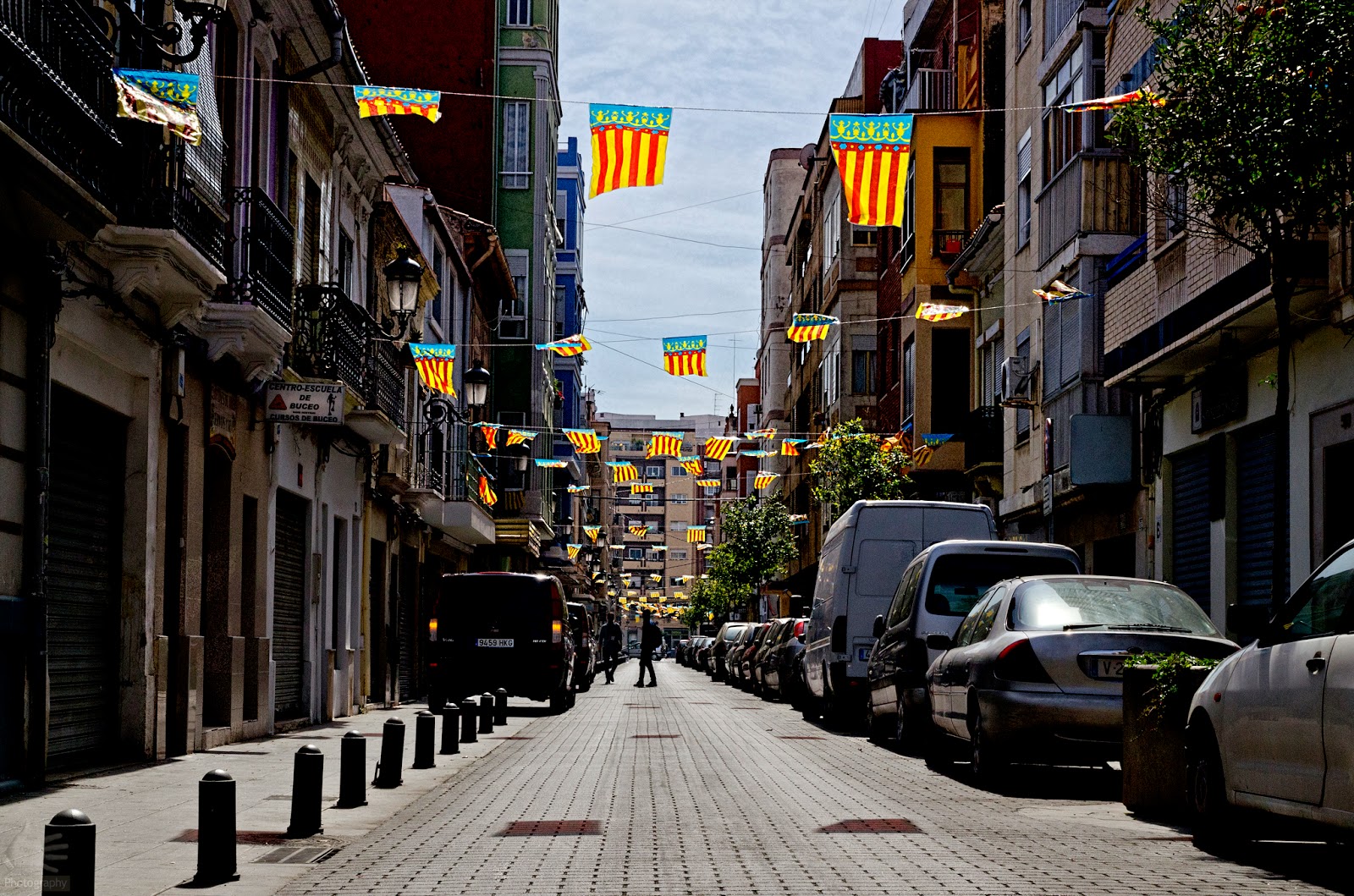 Because of the festivities, many of the streets were decorated with colourful bunting.

On the first day of shooting we worked through some sets and then contributed to the street decorations with laundry props that were used when we worked with a model for the scene that was set up to be shot from across the street. 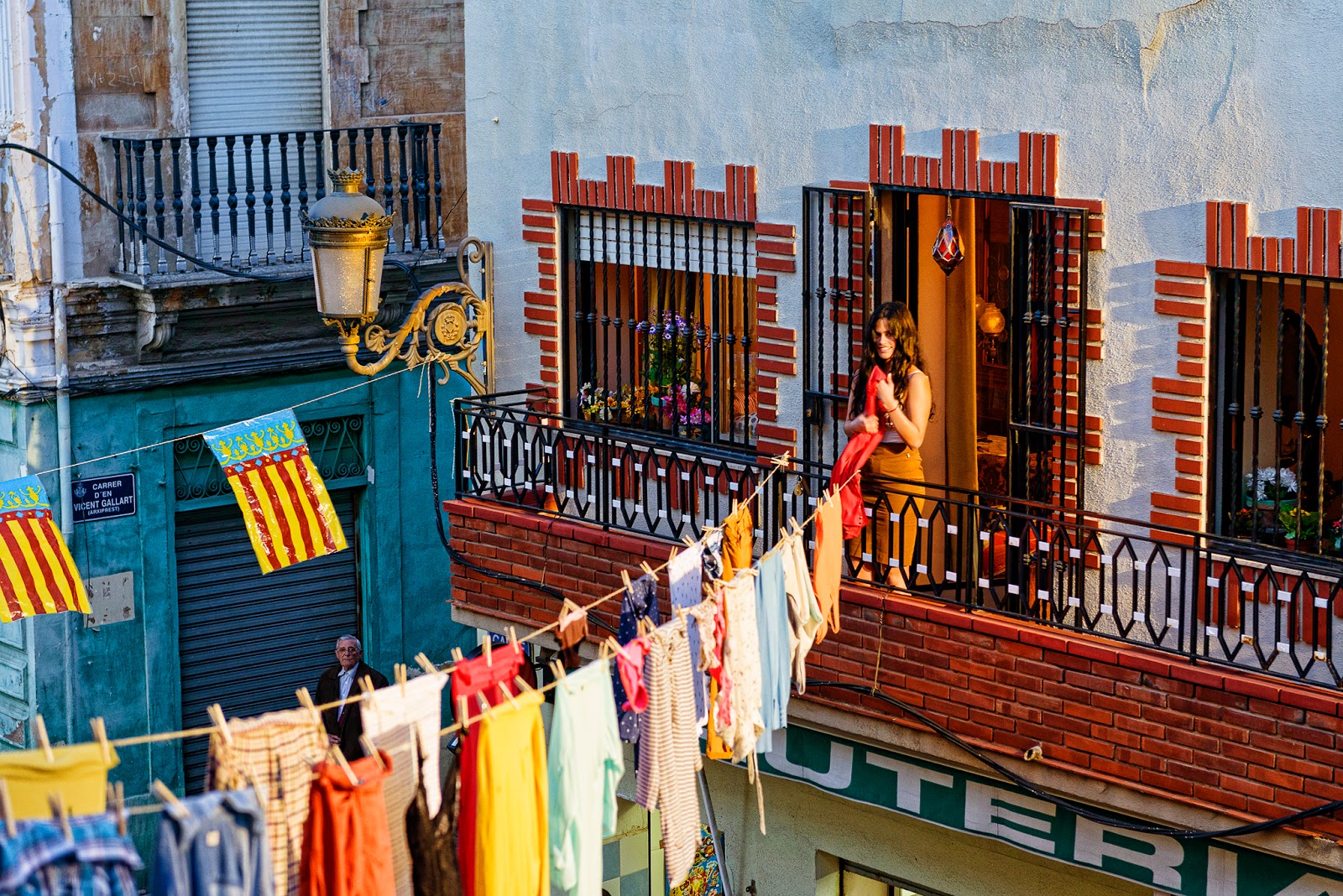 The following morning we shot the street scene with our poster boy model viewed from a balcony. It turned out to be a busy right of way but the production crew did a great job of managing to stop people appearing in shot without really annoying any general public who wanted access.

The other challenge for them was stopping people who had seen the cameras and lights and were trying to intentionally get into the shots! 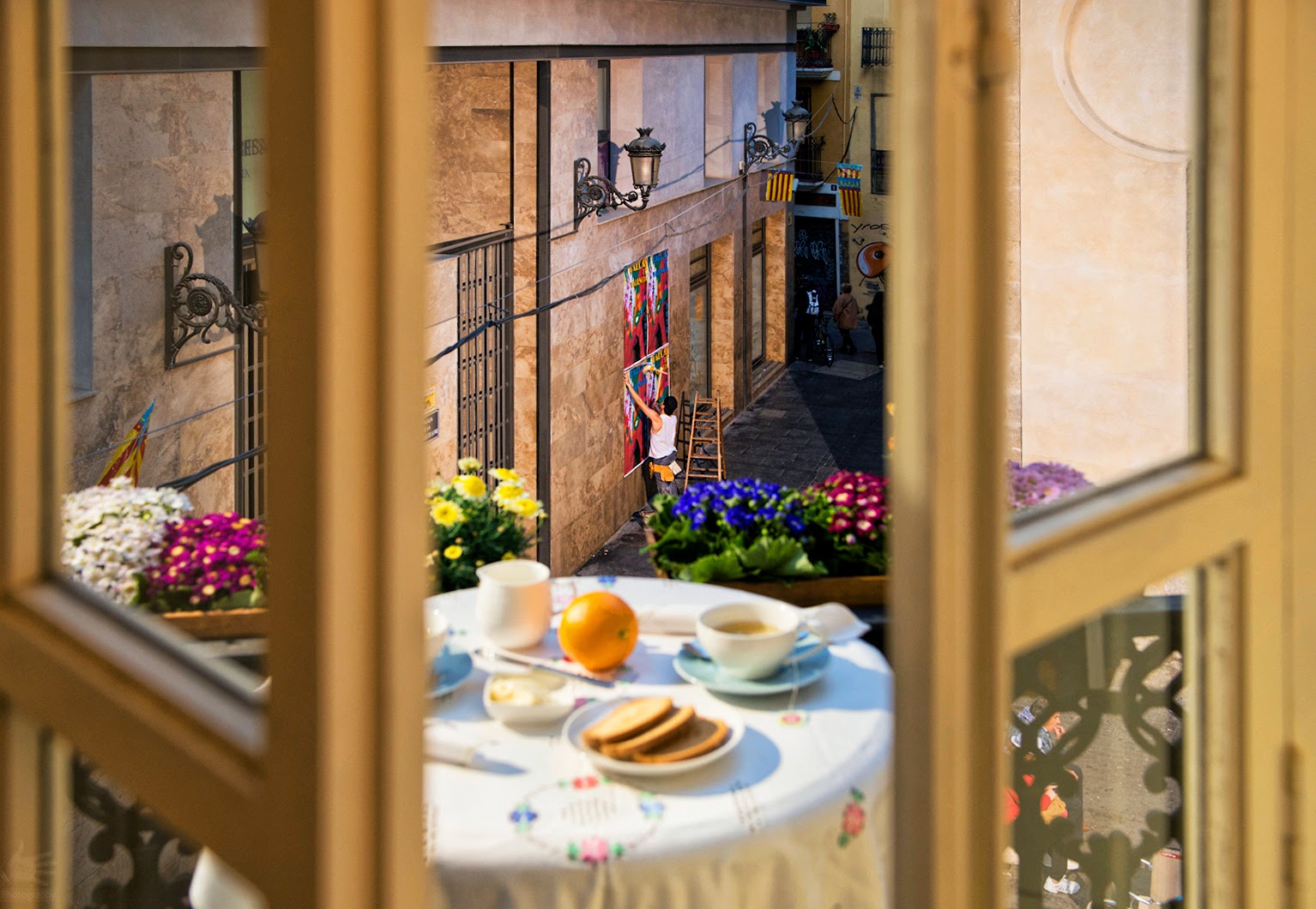 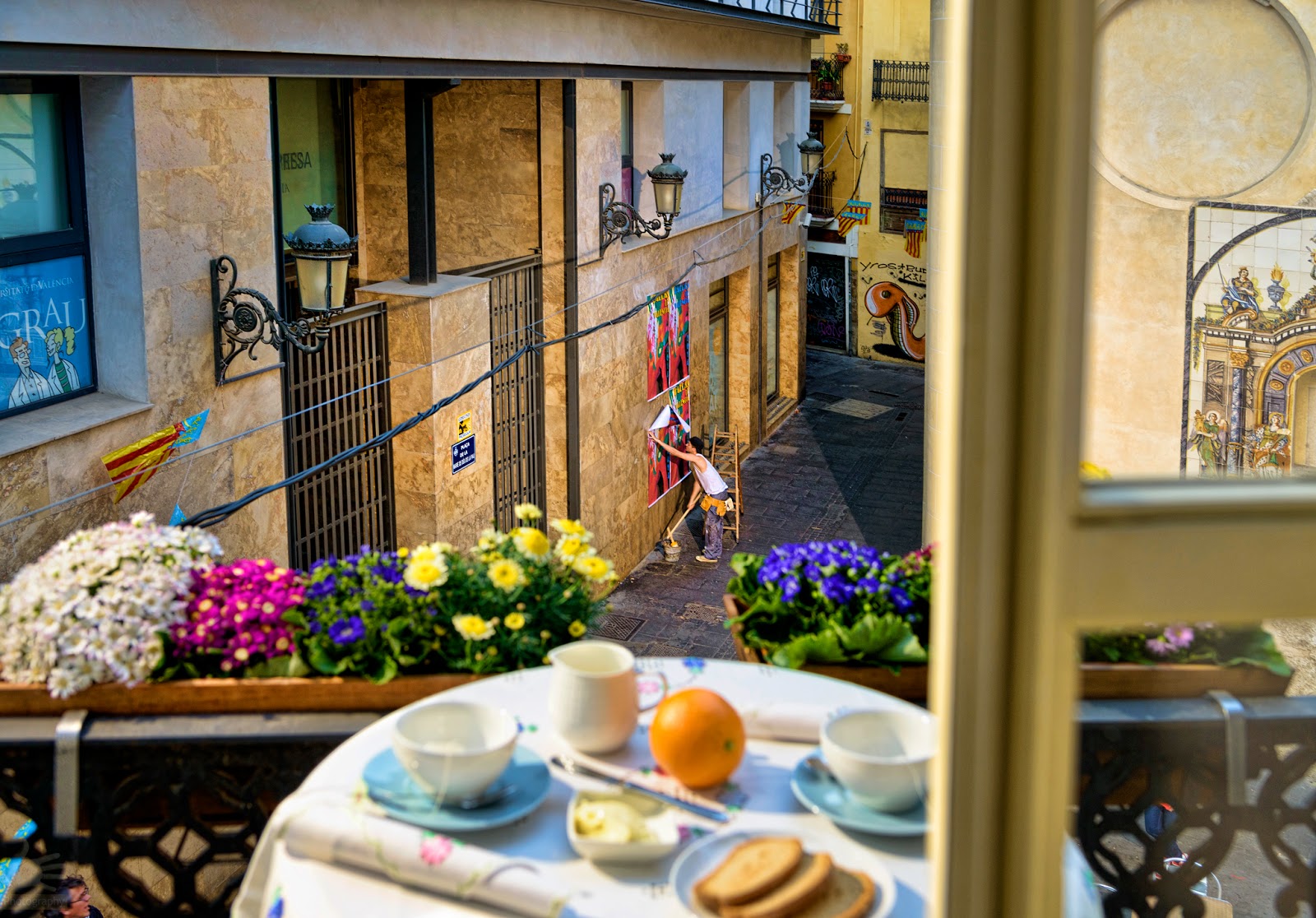 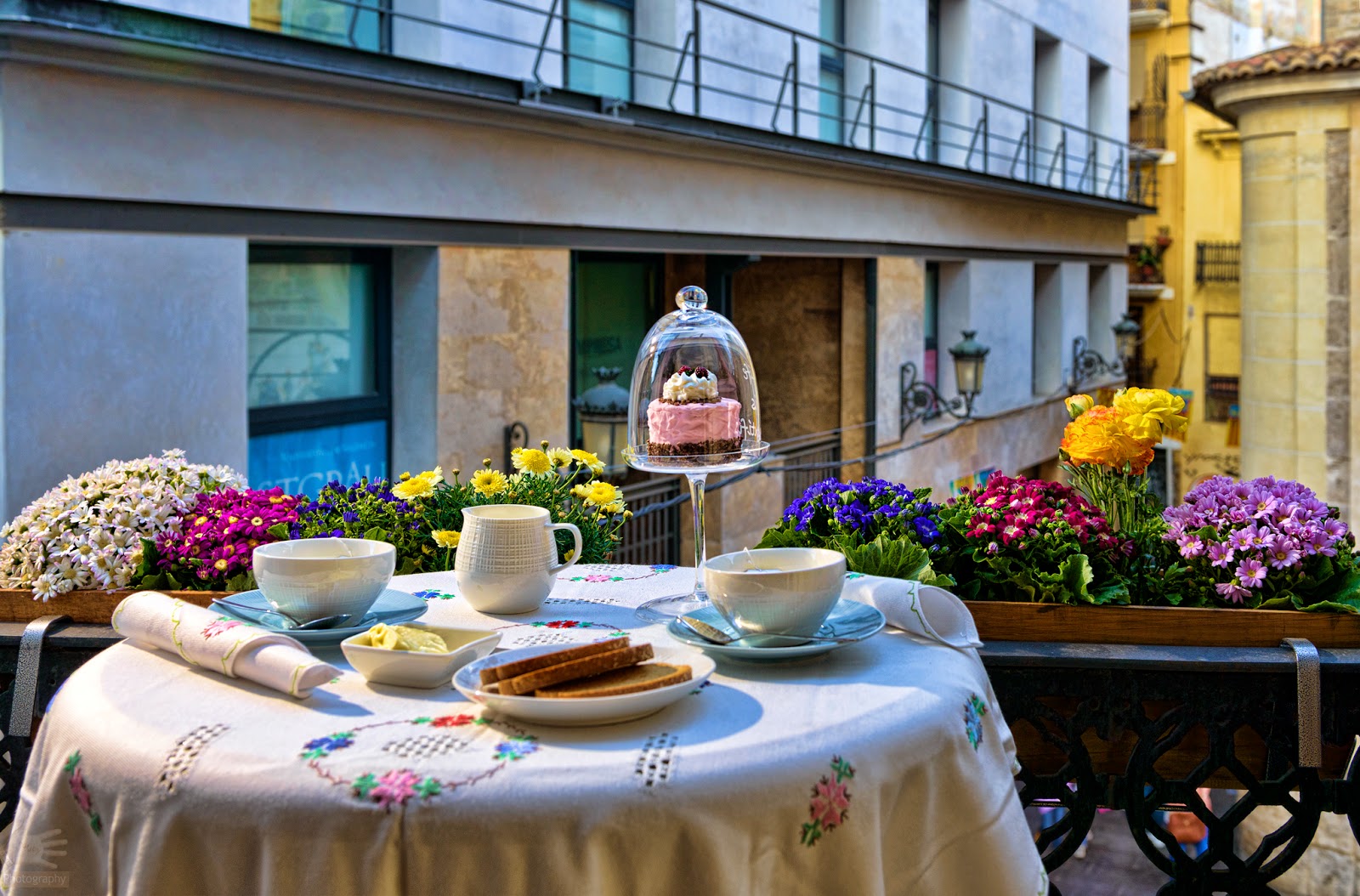 Once we had the scene and wrapped, we were able to have some lunch and make preparations for the night shooting. There were a couple of locations that had been confirmed that would give great viewpoints for capturing the fires and fireworks that would be set off that night at the climax of the festivities. In order to have things well covered, the director and her film crew went along to one of the main sites but I was also given a video camera as back up for the site that I would be covering.


The fires and fireworks would happen around midnight, so I set up my "office" for the evening and started to captured stills of anything I saw that could be used by the client. As I watched and waited, the square below me suddenly began to fill up with people and a variety show took place on the stage at one side of the square. Once the fire was being lit and the fireworks ignited, I put down my stills camera and used the video camera that had been left with me. 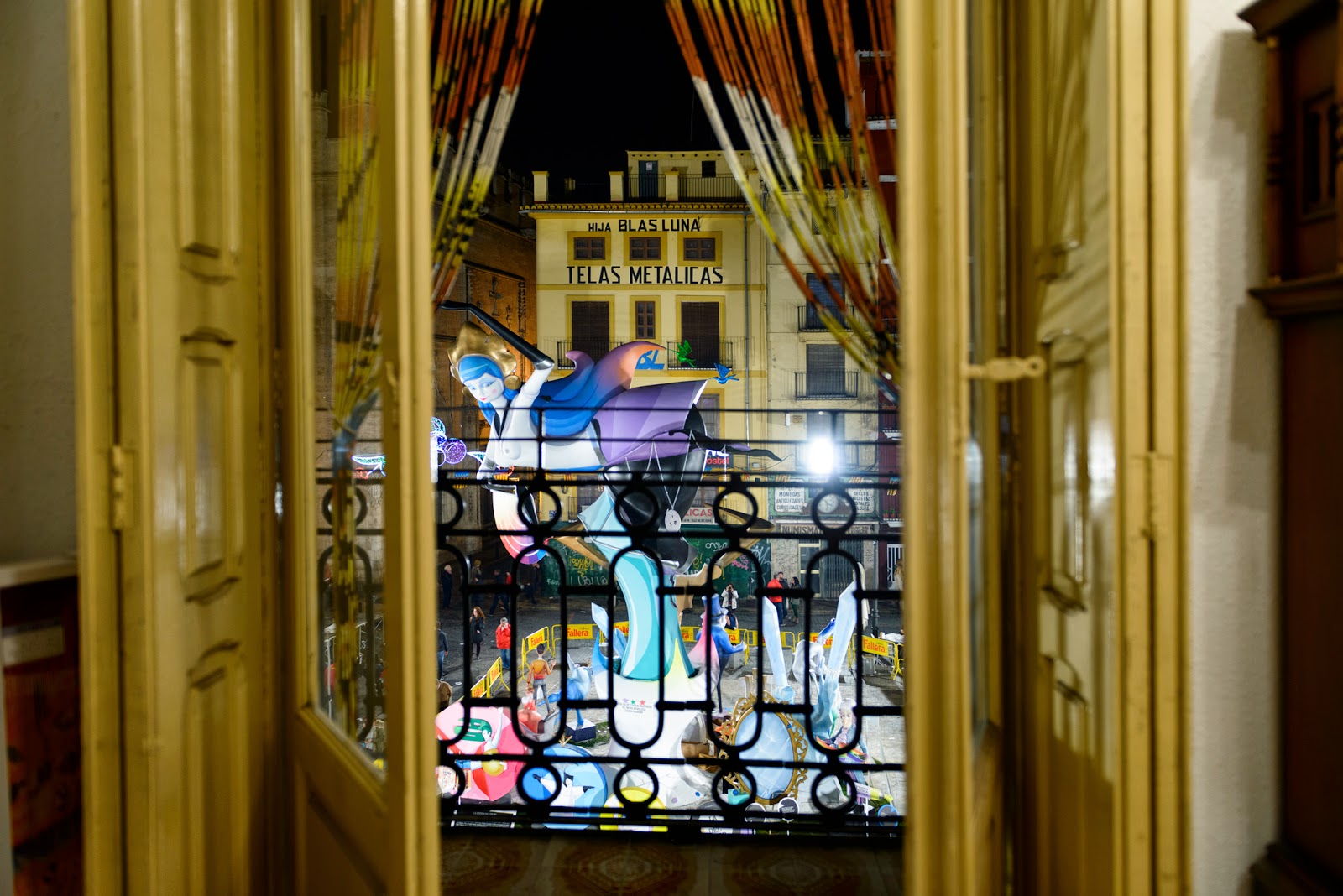 Although the display was spectacular, I later found out that the film crew not only had a similarly spectacular display to shoot, the assistant director actually caught on fire from sparks from the fireworks whizzing by! You can imagine all the puns… No one was hurt and no medical attention was needed. 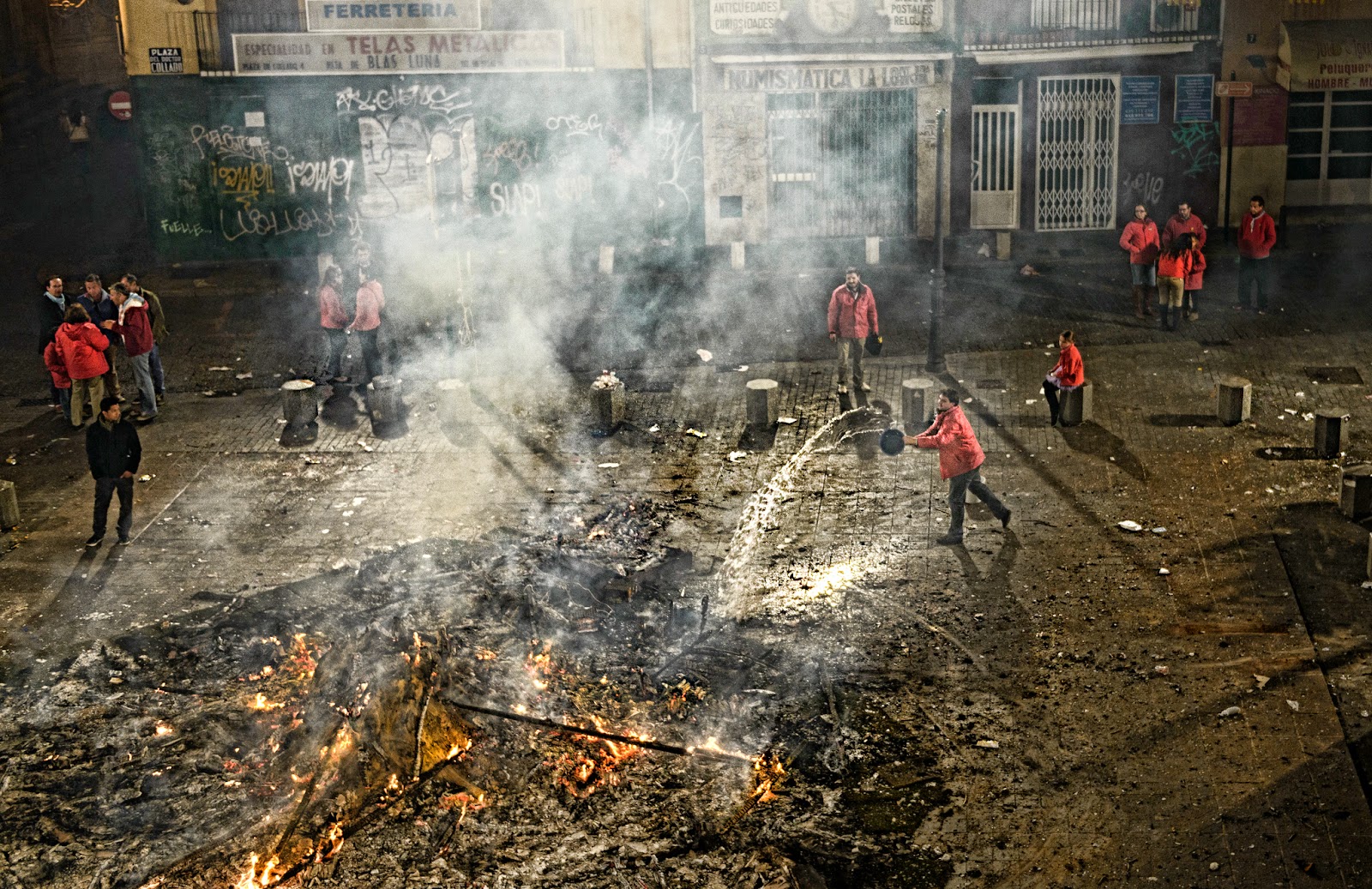 We were all regrouping at my location, so as I waited I watched the crowds disperse and saw some of the organizers come along with water buckets to douse the fire. And so we wrapped Valencia and then it was time to celebrate the first of these shoots. One of our local team took us to a food cart which also served drinks and we were able to make a toast before heading back to our hotels before flying to London the next day. 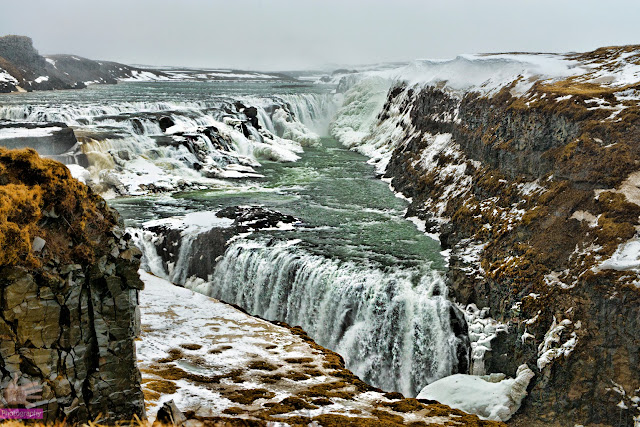 I'd never visited Iceland previous to this shoot but it was on my list of places I wanted to visit. And now that I've been there, it's definitely high up on my list of places I'd like to visit on my own itinerary. It really does have a magical undertone to it all and the mix of fire and ice is readily apparent as you travel around.

A 4:30 am start got us to the location and on set ready for the first shots of the day.

While the film and production teams were carrying out some final touches for their shots, I spent a little time outside capturing some general shots of the views surrounding the location. It was still before sunrise so I was glad that I was wearing lots of layers including thermals, a fleece, down jacket, Goretex over jacket, scarf, gloves and my Jamaican Bobsleigh Team beanie hat!

Eventually the sunlight began to filter through the cloudy sky and we are able to execute our shot lists and anything else that we saw that we might use. 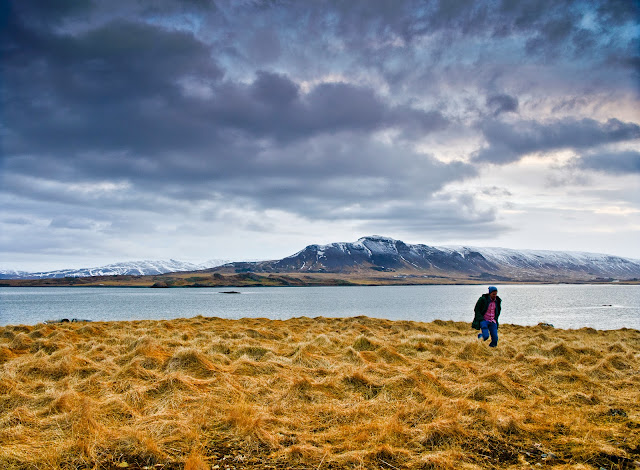 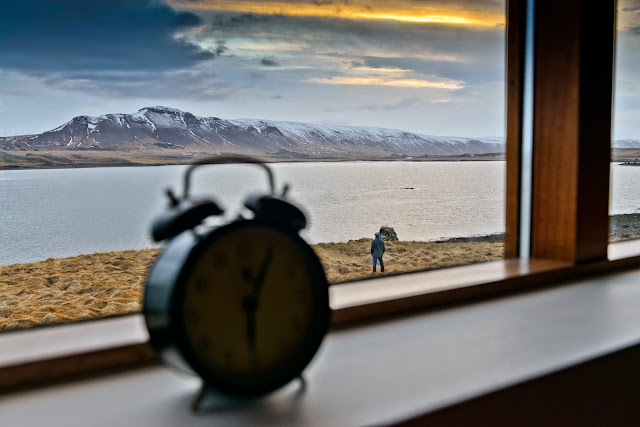 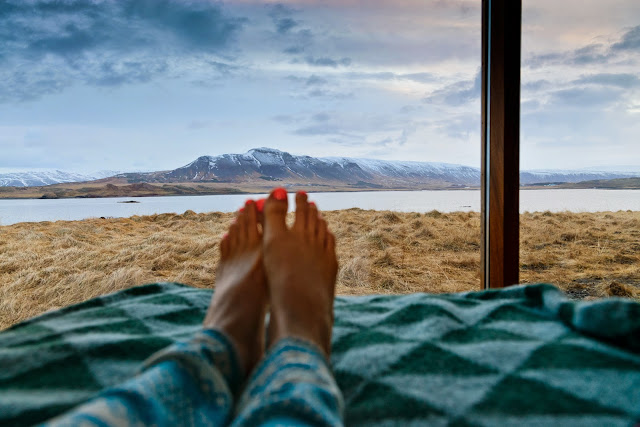 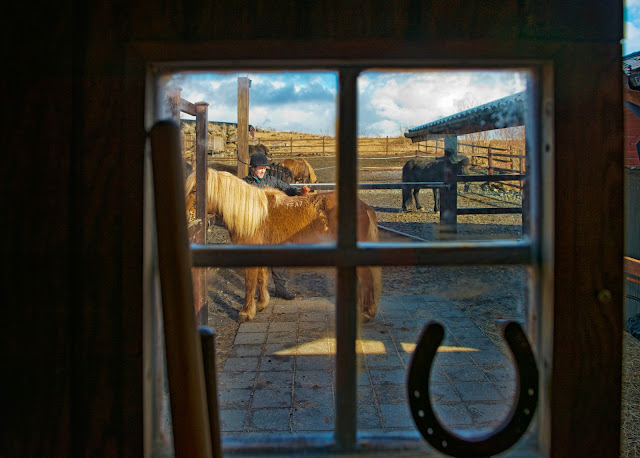 As the day progressed, we worked through the scenes which also included a scene with a horse. The guy grooming the horse deserves a special mention here. Even though he looked great in his takes, he is actually not super comfortable around horses. Even so, he never hesitated once during the whole time he did multiple takes for the film crew and then repeated for me so I could get my stills. He was relieved though when we wrapped.

While frames and footage were being captured, some of the production crew had been busily putting together an igloo for the scene with the Husky. She was a beautiful creature and I really enjoyed working with her and seeing how her handler set her up for each of the shots we needed. Not only did production do an amazing job with the igloo. they also icy blasts of snow on cue too as you can see in Alma's film here. 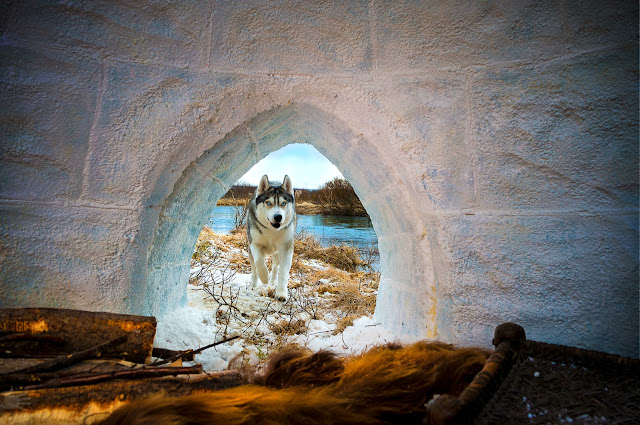 Did I mention it started off very cold that day? Well, the Clients, Agency, and Production were traveling with us and also had plenty of work to do themselves. Even though they were working indoors some of the time, for most of the morning they could been seen dressed for a blizzard while getting things done.

There was also a lovely DeSoto car at the location that we were able to include in the Iceland shoot. At the end of the day we piled into our vans to head back to Reykjavik opting not to "borrow" the DeSoto for the ride. Back in the city, we showered ate and for myself, a few hours into the early morning were spent editing down my shoot so that I could supply some images to the Agency back in San Francisco. 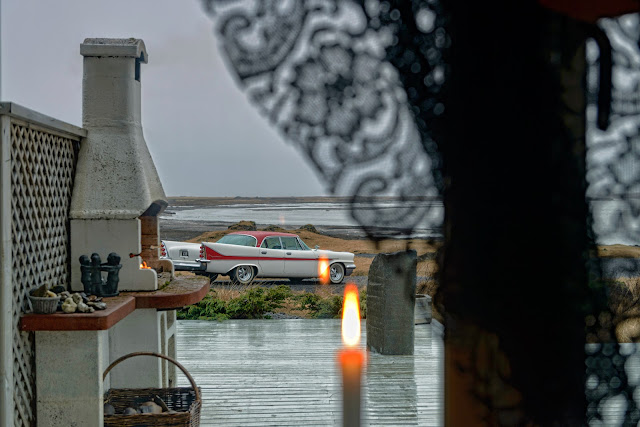 We were due to fly out of Iceland the following afternoon but the local production team said they could fit in some quick sight seeing before taking us to the airport - provided we were happy to do another early start.

So in the morning we set off for a quick stop to visit the Gullfoss waterfalls and some hot geysers and then a couple of hours of blissful relaxation in the Blue Lagoon - Utterly, absolutely, definitely worth the early rising! 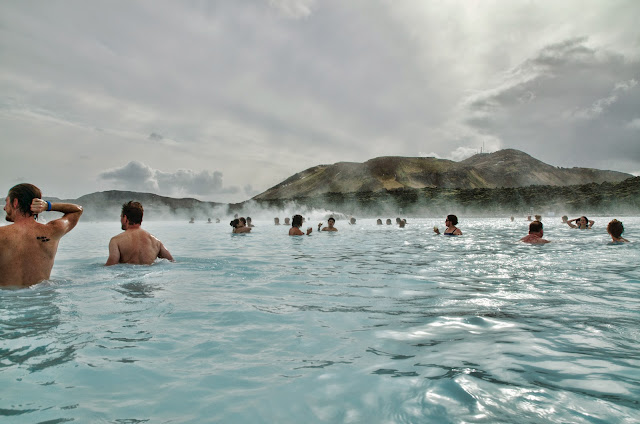 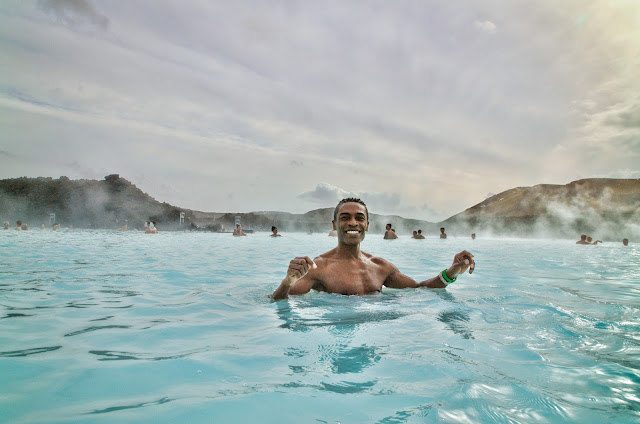 Posted by Pure Roijoy at 3:30 PM No comments: